Latest News, The Blogful of Salt 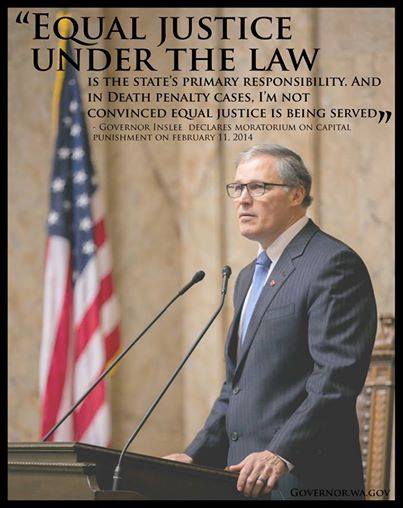 Governor Inslee’s action in issuing a moratorium on the death penalty was a necessary step toward “equal justice under the law” which we agree should be the state’s primary responsibility. We thank the Governor for his leadership and courage with this action which has increased conversation on this important issue. We look forward to working with the Legislature to bring a bill to the Governor’s desk to fully repeal the death penalty in Washington State.

A Time for Celebration!

On Tuesday, Feb. 11th as the news of Governor Inslee’s moratorium on the death penalty reached me, I found my eyes welling up with tears of joy. While I knew there was a possibility this historical moment would come, I was completely unprepared for the announcement and the emotions it would evoke on that morning.  Somewhat overwhelmed with joy, relief, and hope I scrambled to spread the good news to the amazing folks I am honored to work with on this issue, the members of the Inland NW Death Penalty Abolition Group (INDPAG). INDPAG is an affinity group of PJALS which was formed 30 years ago by Rusty & Nancy Nelson.

There are other PJALS folks who have played significant roles in this group over the decades, some I know well and some I have not yet met—I thank you all.

In honor of all the passionate community members who have taken any form of action, Nancy Nelson for her dedication to the struggle and leadership in the formation of both INDPAG and the Washington Coalition to Abolish the Death Penalty (WCADP), and Gov. Inslee for his courage in taking this stand for true justice, INDPAG members raised a glass at our meeting the following evening. We  crafted handmade Valentines which were mailed to Gov. Inslee to express our appreciation. We also continued with planning next steps in our movement to achieve repeal of the death penalty in Washington, acknowledging that our struggle is far from over.

Despite the knowledge that we still have work to do, I want to stay in the moment for a bit and celebrate this historical moment. For me this moment means that I will not have to travel to Walla Walla this year to hold a sign in opposition to a murder by my state; that my friend whose son is on death row will not have to face his execution while Inslee is in office, that other friends who have formed relationships with some on the row will not experience that heart break either; and we have increased conversation on this important issue.

The time is now to frame the dialogue, increase public awareness of the facts, and pressure law makers to join us on the right side of history. We hope that some of you may be re-energized by the hope this moratorium has given us and join us in our efforts. INDPAG meets on the 2nd & 4th Wed. of each month at 5:30pm in the Community Bldg., 35 W. Main.